A new Nas song surfaced last week called “On The Road Again”. It isn’t actually a Nasir Jones original, but rather, features the hip hop elder statesman rapping over the 1920s blues song of the same name originally recorded by the Memphis Jug Band.

It was accompanied by a video from PBS from the docu-series American Epic. In part produced and scored by Jack White, American Epic – which will focus on the history of the beginning of music and cover a lot of music of the 1920s – had a number of guest musicians contribute to its soundtrack, but Nas is the only rapper who contributed to the soundtrack.

Nas gave some backstory to this song, saying, “The Memphis Jug Band sounds like something today.” Nas went on to further explain by adding:

“These guys are talking about women, carrying guns, protecting their honor, chasing after some woman who has done them dirty. This is not high society black folks. This is the down under, street, wild black folks that they’re singing about.  And it’s the same as rap music today. They were rapping about street life and gangster life and hustling, just a dark side of the world.”

To learn more about the backstory of the original “On The Road Again” that Nas felt inspired to rap over, click here.

Below is the audio of Nas’s version of “On The Road Again” from the American Epic soundtrack.

Chicago has had a history of producing prolific rappers and hip hop artists – for instance, Common, Lupe Fiasco, and of course Kanye West – yet recently the city has seen an influx of talented rappers and hip hop artists, many of whom are flying under the radar. Yeah, Chance The Rapper comes to mind; but following the immense success of his most recent mixtape Coloring Book – which reached #8 on the Billboard 200 and became the first album to chart based solely on streams –  it’s safe to say he’s becoming a household name in the genre, if he isn’t already. One of the unsung rising stars of Chicago’s flourishing hip hop scene, Mick Jenkins, is releasing his proper debut album The Healing Component later on this month.

After Jenkins’ 2014 mixtape The Water[s] was well-received by critics (including a 4/5 from the hip hop magazine XXL, and a 7.8/10 from Pitchfork Media) he garnered some recognition in the hip hop scene, even outside of Chicago. Jenkins established his name with his talent as a lyricist and his intellect that allowed him to be as much witty as thought-provoking, frequently mentioning water as a metaphor for truth. This speaks to the character of the Chicago musician, that his lyrics rely more heavily on the hunt for truth and his conscience than bragging about money and possessions or a fondness for drinking cough syrup. Following The Water[s]’ release he appeared on the 2014 Smokers Club World Wide Roller’s Tour which featured Method Man and Redman, among others, opening himself up to a bigger audience than he’d ever had the opportunity to before. In 2015, he released his EP Wave[s], a sort of follow-up to The Water[s], which also was met with critical acclaim. Wave[s] was Jenkins’ first chance to respond to having higher expectations following the success The Water[s] had seen, and he made it clear he’s no one trick pony. Mick seemed to briefly express those sentiments in his featured verse on “How You Feel” from hip hop producer Statik Selektah’s album Lucky 7 – released a little over a month before Mick would release Wave[s].  In the verse he says, “All I’ve been thinking lately is can’t flop, won’t flop.” And while Wave[s] was met with positive reviews from critics, this line feels just as pertinent now looking toward the release of Jenkins’ debut album.

The pressure is still on Jenkins to bring something special to the table with The Healing Component; especially considering the level of acclaim and popularity that fellow Chitown artist Chance The Rapper has achieved, including the success of 2016’s Coloring Book – which was actually set to include a song featuring Jenkins. The track I’m alluding to here is “Grown Ass Kid” which also featured Alex Wiley and Cam O’Bi, was leaked online the day before Coloring Book’s release. Chance has since revealed a sample clearance kept the track from being included on the mixtape. In his words from a Reddit AMA he was, “bummed it didn’t get cleared it would’ve been track 11.” The song’s beat is a prototypical Chance beat geared for Chance’s half rapped, half sung rapping style, yet Mick flexes his ability to flow with any beat he’s given. Mick’s talent shines through on the opening verse and he forces Chance to keep up with him on the second verse of the track; and despite Chance’s recent rise to popularity, there’s nothing on this track that would make listeners think Mick isn’t in the same position. Maybe he will be soon. 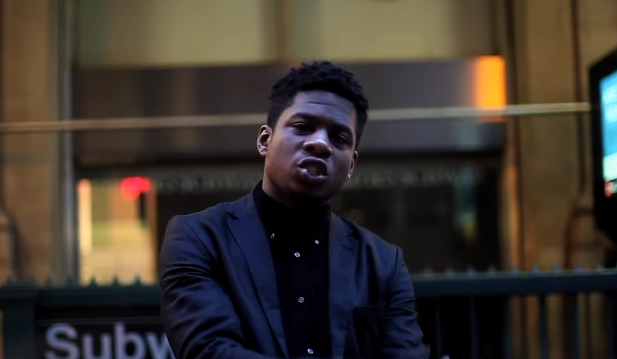 Mick has been on a tear lately, amassing a streak of hot features in the past year or so. What might’ve been his most impressive in that time span was his feature on “Drive Slow” by another fellow Chicago hip hop artist, relatively unknown Bel-Air. Both Mick and Bel-Air go in on the beat like it slept with their mothers. This isn’t one of those songs where you hear there’s a good rapper featured on and you spend half the time suffering through until the feature’s verse. No, “Drive Slow” begins with a catchy hook by Bel-Air and then he delivers a crisp verse where he touches on the state of his city without getting bogged down by the negativity. Donato does a great job of production on this, and the beat bumps with the kind of interesting bass line Mick thrives on – and he feasts on this one. He does what he does best, mixes his wit with wordplay that’s both fun and conscious of overindulging. He takes control of the mic opening his verse saying, “Pump brakes. Pump faked his ass, sundress on my woman, sun baked, she bad,”  You can feel him smirking as he says these opening lines. His masterful wordplay affords him the ability to be clever while cautioning against being careless. “I’m ridin’ shotgun, we prolly got smoke, we prolly got drinks, we prolly got hoes, we prolly not thinkin’, we gots to start thinkin’,” he raps as his verse is coming to an end. There’s still a carefree vibe in the song, Mick is talking about things he does and that other people do too so when he uses “we,” it’s a collective “we” that includes himself – he isn’t preaching as if he’s innocent.

So far Mick has released two songs off The Healing Component where he continues to showcase his talent as not just a rapper but a hip hop artist. “Drowning” is the second of the new tracks he’s released and it features Toronto’s BADBADNOTGOOD. This six minute-long track grooves slowly being pressed forward by a psychedelic hook that finds Jenkins frequently repeating, “I can’t breathe,” the last words Eric Garner, a black man from New York, repeated as police strangled him in 2014. Garner’s death brought more attention to the bothersome trend of racism and police brutality in America. While the song has political undertones (the line, “Won’t we need the litigation,” is also repeated as part of the hook, as a reminder that no indictments were made in the case of Garner’s death – the only litigation was a nearly 6 million dollar out-of-court settlement being reached) Jenkins switches gears often in the song, not allowing himself to be bogged down by the negativity of the subject matter. From the slow-moving hook, to a hard-hitting verse Mick raps in the middle of the song to remind listeners he can still spit fire, to a jazz-infused version of the hook where the song picks its pace up, to the resolution of that haunting hook, you can see a flexible talent at work on this track. When Mick is rapping on this track, he is arguably at his best. Lines like, “I ain’t preaching at you, I don’t touch boys,” where he’s calling out other rappers for being boys instead of men and the Catholic Church for their history of molestation, remind you he is as intelligent as he is clever with an unrivaled ability to turn a phrase. The whole song features references to African American culture and racism as well as Jenkins’ catalog of previously released mixtapes. The theme of water (present already in the title) is reoccurring throughout the track as well as in the music video, in which Mick is featured as a runaway slave paddling down a river. The way Jenkins counterbalances constant transitions musically in the song while continuing to cling to the consciousness and the concept of water so closely associated with him now, makes “Drowning” a rewarding listen. Mick ends his verse in the song emphatically, “Talkin’ revolution, when the waves come they turn feline, I been turnin’ tricks in the coldest part of the deepest water like a sea lion, you could see why.” You don’t have to catch his references to his EP Wave[s] and his mixtape The Water[s] for these lines to be nasty, which encourages new listeners; but people who were already fans can enjoy them at face value and for their underlying references.

Going off of Mick Jenkins’ impressive catalog of releases and features, you can expect his debut album to be nothing short of another exceptional release showcasing this Chicago talent. And with how well-received his previous releases have been by critics and fans, The Healing Component (out September 23rd) could see Jenkins gain some major recognition as a hip hop artist. Don’t sleep on Mick Jenkins.

Follow The Deadbeat: Series of Nihilistic Ramblings on WordPress.com